In the Dunloggin area, the old Whipps Cemetery on St. John’s Lane was begun as a family cemetery in 1855. It later became a public country cemetery and was used as a place of burial until about 1915. Buried there are not the rich and famous of Howard County, but rather the common folk of early Ellicott Mills—the blacksmiths, the farmers and merchants, those who worked in the mills and for the railroad—and their children. The many babies’ graves at the Whipps Cemetery testify to the harsh realities of life in the 1800’s.

After 1915, the cemetery became over-grown and forlorn. Burials ceased, and the one acre site—once a beautiful spot of carved marble monuments and ornate Victorian iron fencing around the family sections—became a tangle of poison ivy and honeysuckle. It served as a playground for vandals and a community dump for trash.

In 1987, a transformation began. The St. John’s Community Association, working with the Whipps family—descendants of the founders and owners of the cemetery—began a resident project. Today, 18 years later, community volunteers, boy and girl scouts, Master Gardeners of the local Agricultural Extension Service, area garden clubs, and many other individuals and groups have transformed the Whipps Cemetery into a lovely garden-park for the enjoyment of everyone, but especially for the residents of Dunloggin-St. John’s neighborhood. 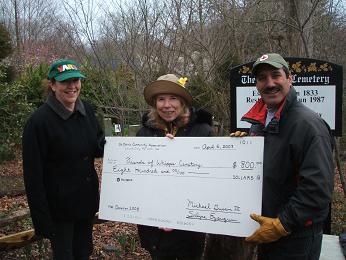 A lot of hard work has gone into the project—and much fund-raising has been, and still is, necessary to sustain it. The cemetery is now owned by a non-profit organization know as the Friends of the Whipps Cemetery and Memorial Gardens, Inc. The St. John’s Community Association donates annually towards the upkeep, but there is no County money given to its support. All other monies have to come from donations by groups and individuals.

Come visit and enjoy our heritage park and please help support this local treasure with whatever you can afford. When you pay your annual SJCA dues, just note an extra amount for Whipps.

Whipps Cemetery is located in the 3600 block of St. John’s Lane. Parking is limited.

Photos taken by a local photographer during our April Daffodil Celebration

This message is only visible to admins.